Note: This is derived from a speech I gave at toastmasters last week, inspired by the arrival of my very own brand new Oculus Rift VR headset

In 1984 the author William Gibson penned his first book, called Neuromancer, and inspired a generation.

In it the protagonist navigates through cyberspace.

If you don’t know what cyberspace means, you are not alone.  At the time that William Gibson wrote Neuromancer, nobody else knew what it meant either.  He invented the term.

Cyberspace in that book was a virtual reality.  An immersive computer generated world which when you are in it, feels just like the real thing, beamed directly to the brain via a neural interface.

Our imaginations were fired.  We wanted it so badly.  Looking back, I’m not even sure why, but man was it cool.

There was no way anything like it was possible then.  A personal computer could barely output color, let alone create that kind of world.

Time passed, and by the 1990s my generation still hadn't forgotten the dream of Neuromancer.  Computers and computer graphics were getting more and more powerful.

You even started to see video arcades with games with virtual reality headsets.  I still remember the day I tried one on, sickly smell of cigarette smoke, music from the arcade games pouring in my ears, almost as loud as the pounding of my heart.  This was it, I was going to experience Virtual Reality.  I placed the headset on my head, and looked around as it projected images into my eyes.

The disappointment was devastating. Not only did it feel like I was wearing a dustbin on my head, it was so clumsy and heavy, but the experience was terrible too.  Clunky objects drawn as outlines, which struggled to be re-drawn as I over my head around.

In the old days if you had an idea for a hardware product, such as some kind of electronic gadget you’d need to go to a big company to get it funded.  Endless bureaucracy and meetings.  You’d likely have to give up the rights to your product, and compromise your soul in order to get something like your idea to market.

But the internet and the world wide web changed that.  Now, when someone has an idea for something, such as a new watch, they can go to sites such as Kickstarter, and pitch their idea not to a committee in a bureaucracy, but instead they can pitch their idea to the world.  They can describe what they want to make, what their experience is in the field, what it will cost to bring it to the market, and they can let thousands of individuals invest in their idea, in return for a sample of the product if it ever gets made.

So that's one thing that happened”": decentralized “crowd funding” as it is called, a new way of bringing products to market.

The other thing that happened is mobile phones: Incredibly powerful miniature computers that we all carry in our pockets.  Because they are being made in massive quantities the costs of the components that go into them has dropped massively too.  And those components are interesting.

Can you imagine what would happen if you took those screens, attached them to some kind of a helmet, like ski goggles, included the sensors from phones to accurately track your head position, and hooked them up to a computer to generate slightly different images on each screen?  You’d have a virtual reality system.

As it happens, someone in the states did have that idea.  Someone that knew enough about virtual reality headsets to put together a working prototype. 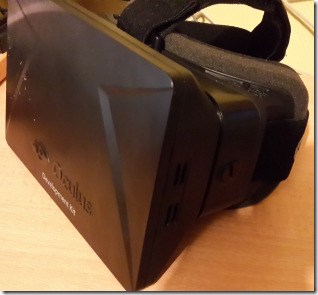 If only they had some way to bring their idea to market.  Of course they did, and the Oculus Rift Kickstarter was a massive success.

Those that have tried them on have been astounded by the results.  It creates a truly immersive virtual reality experience.

Anyone who was wondering what value virtual reality can possibly have beyond games need only watch a 90 year old women trying them on, screaming with joy, walking around an Italian villa, leaves blowing in the wind, butterflies flittering in the air.

There are plenty of people who for one reason or another are unable to travel, or even to move, yet they can experience the world through virtual realty.

School kids can watch the birth of the universe, or chemical reactions happening, and step into the reaction to see it from different perspectives.

This technology is still young.  The Oculus Rift is still not publicly available.  Its only available to software developers who wish to create for it.  But its coming.

I’ve talked about the ski goggles, but what about the sick bag?  Well all is not perfect with the Oculus Rift.  Many people report nausea after trying it on for a while.  Perhaps its the eye strain, or perhaps the image still isn’t moving quite fast enough and the body senses that.

I’m sure that they will lick the nausea, and soon, very soon indeed, you too will be visiting new parts of our world, or even other worlds, in virtual realty.