Chrome is a cool browser, but its secret sauce is that no matter whether you are using iOS, Windows, Mac, Android, Linux or ChromeOS, you can sync your bookmarks, passwords, recently viewed URLs and more.

Did you noticed any OS missing?  No?  OK, so perhaps you don’t use Windows Phone.

But I do, as well as Android and iOS, and it bugged me that there was no way to sync all my Chrome goodness to Windows Phone, since Chrome is not available for Windows Phone.

So I implemented my own Chrome sync engine on Windows Phone, and in the process learned how Chrome sync works.

In this post I'll share what I learned, including how you authenticate in order to use it.

I'm going to do this by way of the free Chrome sync app I created for Windows Phone, called Chrync. 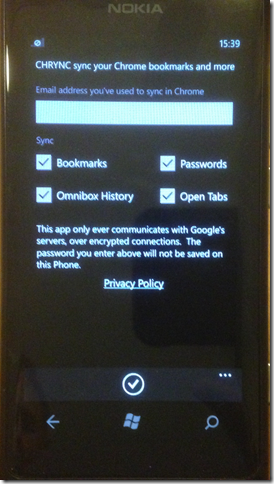 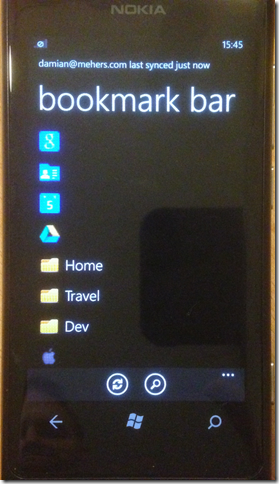 I reasoned that there must be a way of talking the Chrome sync protocol directly to Google's servers, since Chrome itself does it.

I started off by downloading the Chrome source code, and building it, and running it with a debugger attached.

I also discovered the wonderful world of Chrome debug pages, which are very helpful, especially the sync internals page which you can access by navigating to chrome://sync-internals/

I found that the Chrome sync protocol is layered on top of a Google technology called Protocol Buffers, with the Chrome sync structures being defined in a language independent protocol buffers IDL.

The main source is at http://src.chromium.org/viewvc/chrome/trunk/src/sync/protocol/, and there you’ll find the message types that are sent to and from the Google servers when a sync occurs.

If you want to browse, I suggest starting with sync.proto which defines the SyncEntity message containing core sync item fields, including an EntitySpecifics (also defined in sync.proto).

Over time various extensions have been defined.  Indeed every time I check the GIT source repository it seems that something new is happening, such as SyncedNotificationSpecifics.

I wanted to talk the Chrome protocol on Windows Phone, and went hunting for a C# implementation of Protocol Buffers that worked on Windows Phone.  I found two: protobuf-net by Marc Gravell and protobuf-csharp-port by Jon Skeet which I ended up using.

The next step was to work out how to authenticate.

Like many Google users, I use two factor authentication, and since I am especially paranoid, I have a custom Chrome sync passphrase defined.

Since I was making the app mainly for myself I needed to support both two factor authentication and custom passphrases.

Google has a standard OAuth 2.0 implementation which they describe here.

You direct the user to a Google web site with an authentication request to Google, specifying in the scope parameter what access you require, for example you use userinfo.email to request access to the user’s email address.

You can indicate that your app requires access to all kinds of Google services using the Google Cloud Console.  You’ll notice though that there way to specify to access a user’s Chrome sync data.

Below you see the OAuth 2.0 process in progress inside a web browser I host within the app.  You login, using two factor authentication if it is enabled, and then you get prompted to ask whether you want to give the app the access that it requests.

For some reason, Google’s OAuth prompts are always in German for me, despite the fact that I speak no German, and although I live in Switzerland, I live in a French speaking area.  If you don’t speak German you’ll have to take my word for it that it is prompting for permission to access your email address and your Chrome sync data. 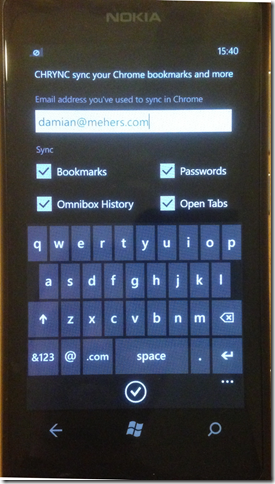 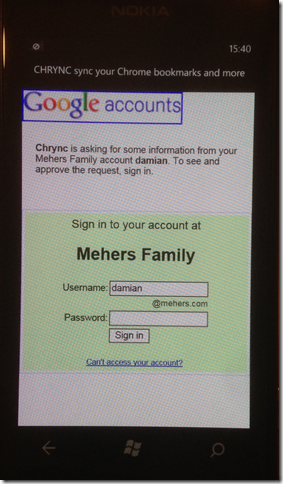 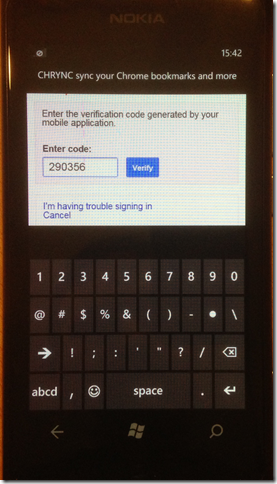 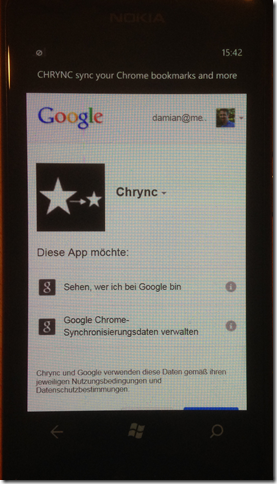 The result of this authentication are two tokens: an access token, which is good for a certain amount of time, and a refresh token, which can be used to generate a new access token when it expires.

Initiating the sync process involves making an http request to https://clients4.google.com/chrome-sync and setting a “Bearer” http header to the access token. The body of the message is an octet-stream which contains the sync request.

The sync request itself is a GetUpdatesMessage defined in a ClientToServerMessage which are defined in sync.proto:

This is my code to build this sync request:

Once this request is sent off we get back a sync response, in the form of a ClientToServerResponse containing a GetUpdatesResponse, which are also defined in sync.proto:

Note that at the start of GetUpdatesResponse there is a repeated series of SyncEntities.  SyncEntity is also defined in sync.proto:

Encrypted data looks like this in its Protocol Buffers definition in encryption.proto:

The NigoriSpecifics (one of the entries in the EntitySpecifics) looks like this, including associated data types, in nigori_specifics.proto

So the first thing to do is to decrypt the encrypted NigoriKeyBag.  I prompt the user for the custom passphrase: 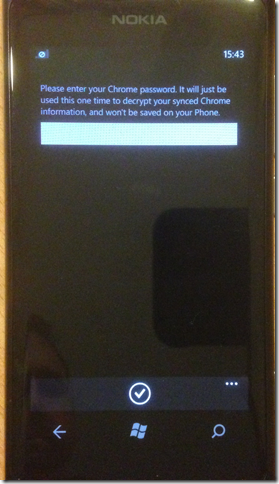 I then convert the decrypted keybag to an actual keybag

Each entry in the keybag consists of a NigoriKey which can be used using the second Decrypt method above to decrypt EntitySpecifics enties:</p>

After that it is pretty much plain sailing.  Here is the processing of the Bookmarks sync entity:

I process the decrypted sync entities and store them in a database, which I then use to drive the UI to let the user view bookmarks, recently browsed URLs, saved passwords, and open Chrome sessions on other machines: 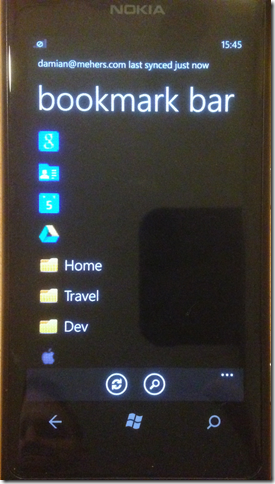 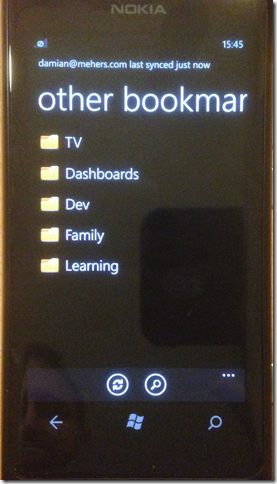 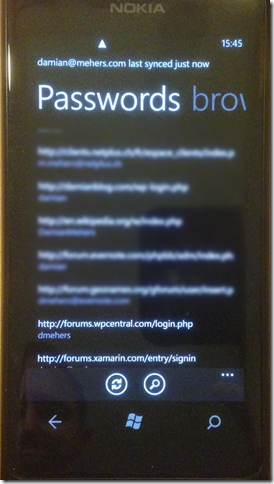 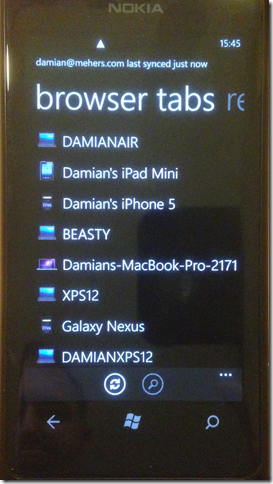 Chrync is read-only.  For example you can’t update your bookmarks.  Also when you tap on a bookmark it launches the built-in browser.

So obvious updates to the app would be to embed a browser within the app, pre-populate password fields, etc.

My biggest concern with investing too much more time in Chrync is that Google could easily pull the plug on the app by disallowing my use of the chrome sync scope in the OAuth 2.0 request.

Although I charged for the app initially, I don’t any more – it doesn’t seem ethical to charge for something that could disappear any day.

I also had grand dreams of bringing Chrome sync to iOS, and indeed got it working, reusing the sync engine using Xamarin, and with fantastic timing, was just looking to launch it when Google released Chrome for iOS …

So, I’ll continue to make minor updates, and if Google do decide to officially document and allow Chrome sync, maybe I’ll make a major update. 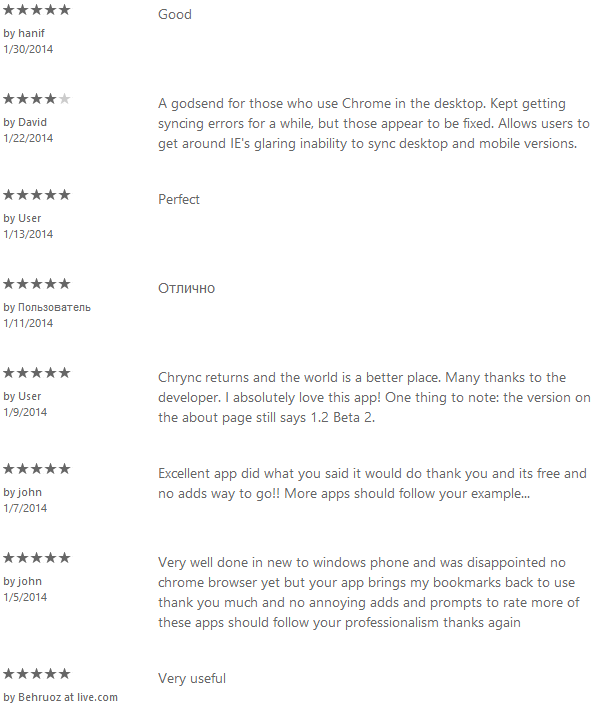