There is a fine Evernote iOS SDK complete with extensive Objective C examples.  In this blog post I want to share what I did to get it working with Swift.

First I created a new Swift iOS app (called “orgr” below), then I copied the ENSDKResources.bundle and evernote-sdk-ios sources …. 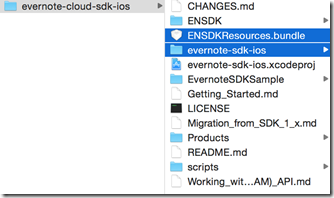 … into the new project, and added references to MobileCoreServices and libxml2 per the SDK instructions. 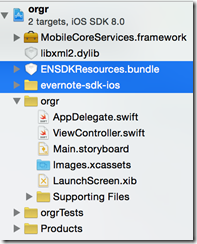 In order for the Swift code to see the Evernote Objective C SDK, I enabled the compatibility header and pointed it to a header in the SDK that included all the other headers I needed.

Once I’d done this, I was able to build.  Next it was simply a question of translating the Object C example code to Swift.  This is the minimal example I came up with:

You’ll need to replace “token” and “url” parameters with the values you can obtain using the developer token page. This simple example just logs my notebooks.  Next steps are for you …