I recently wanted to make some changes to the Pebble emulator, which uses the PyV8 Python-JavaScript bridge to emulate the phone environment running your phone-bases JavaScript companion app. 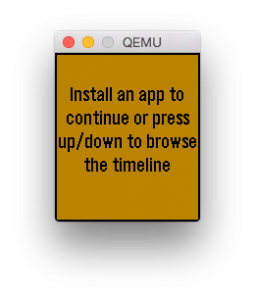 These are some notes on how I did this, mainly so that I remember if I need to do it again, and also just in case it helps anyone else.

Once I’d done that I cloned my one locally onto my Mac, and followed the instructions to build it.

By running a pbw in the emulator, with the debug switch enabled, I was able to determine the magic command to start the emulator locally:

I copied the command, added some quotes around parameters that needed them, and was able to launch the emulator in one window:

The phone simulator in another window:

And then my app in another:

Once I was up and running I started making changes to the Python code.  Since I’ve never written a line of Python before I made liberal use of existing code to make the changes I needed.

It all ended well when my pull request containing my changes to support sending binary data was accepted into the official Pebble codebase, meaning that Evernote now runs in the emulator.