First, a demo: Alexa, tell Evernote to create a note “Remember to call my Mother”:

I recently acquired an Amazon Echo, and although there is limited support for interacting with Evernote via IFTTT, I wanted to simply create Evernote notes as in the demo above.

I’m going to share how I created an Amazon Echo Skill to accomplish what it shown in the video above, and what roadblocks I hit on the way.

I started with the sample Amazon Echo skill which uses lambdas, and got that working pretty quickly.

To update it to work with Evernote, I changed the JavaScript code that recognized the intent to invoke saveNote when the intent is TakeANote (you’ll see where this intent is set up later):

My code to create the Evernote note (invoked by saveNote above) is pretty much boilerplate. It pulls the content from the list of slots (defined below) and uses it to create a note using the Evernote API:

Notice the hard-coded authenticationToken? That means this will only work with my account. To work with anyone’s account, including yours, we’d obviously need to do something different. More on that in a moment.

I zipped up my JavaScript file, together with my node_modules folder and a node package.json:

Once done, I uploaded my zip to my Amazon Skill, and then published it.

This is the skill information I used:

Obviously I couldn’t use trademarked term “Evernote” as the Invocation Name in something that was public, but just for testing for myself, I think I’m OK. 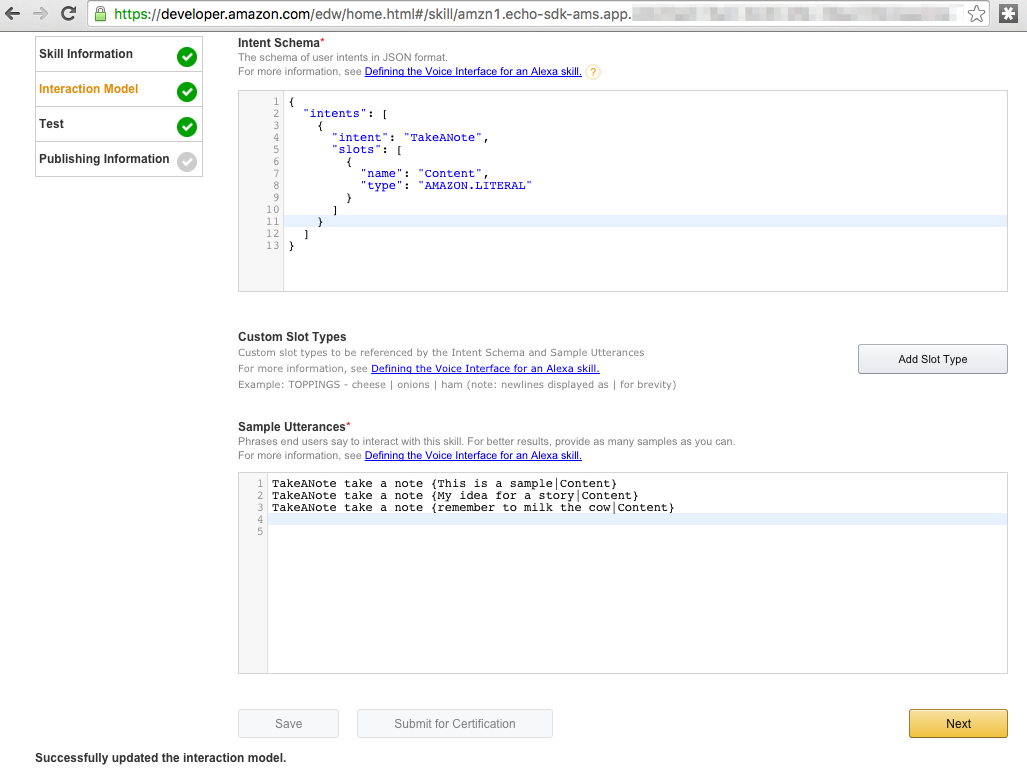 The sample utterances is way too limited here - Amazon recommend having several hundred utterances for situations where you allow free-form text. It would also be cool to be able to have an intent to let you search Evernote.

Once I’d done this, and set up my Echo to use my development account, I could create notes.

The next step was to link anyone’s Evernote account into the Skill. This is where I hit the roadblock. Amazon require that the authentication support OAUTH 2.0 implicit grant and Evernote supports OAUTH 1. I could attempt to create a bridging service, but the security implications of doing so are scary, and doing it properly would require more time than I have right now.

The source is in GitHub

I’ve published the source to this app in my GitHub account here. If you are a developer and want to try it out, get an Evernote Developer auth token and plug in the URL and token in the noteStoreURL and authenticationToken above.