I’m working on my third Apple Watch app built using Xamarin. In this post I’m going to describe how I develop and what some of the issues were that I encountered when testing and uploading to the App Store for beta testing.

At the time of writing (early June 2020), the released version of Visual Studio for Mac has an error where I can’t run my apps on real devices, so I have switched to the preview channel which contains a fix for the issue.

When I’m ready to commit a new feature, I’ll test on a physical watch. To do that I build the iOS host app in release mode, and deploy that to my iPhone (I don’t deploy to the Apple Watch). On the iPhone I open Apple’s Apple Watch app, scroll down to my app:

I then force-quit this iOS Apple Watch app by swiping it away, and go back to my app as above, and it shows as updating (assuming I already installed it). 30-120 seconds later, and the app is installed on my watch and I’m ready to test it:

To release to TestFlight I do a full build of the iOS app and then right-click and select Archive for Publishing: 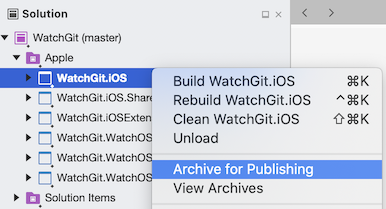 Then I fire up Xcode, go to Window->Organizer and tap Distribute App to kick off the upload:

and that is it.

Blank complications (not a Xamarin issue)

While testing my Apple Watch complications (little icons on the watch face), I saw that some of them were displayed as tinted squares:

The images I’d created for an Apple Watch Complication were in the wrong format. The Apple documentation says “Complication images use only the alpha channel of the image.” … I don’t know about you, but this didn’t mean much to me.

I fixed this by downloading ImageMagick and using this command to turn the icons into black and white:

I did this for all the non-color ones (Circular, Extra Large, Modular and Utilitarian).

Even though my app ran fine on my Apple Watch when built and run locally, when I installed it and ran it from TestFlight it crashed immediately on launch.

I installed a sysdiagnose for watchOS profile to let me see the logs from the Apple Watch in Apple’s Console app, and got a clue. This error:

I googled it, and found that I’d reported the same issue for another app I’d created, and there was a workaround.

Normally an Apple Watch app has two projects: The main project (which contains a storyboard and not much else), and an extension project where all the code resides. Because I want my app to be able to respond to Siri to create notes in my app, I have a third project highlighted in blue below, an Intents App Extension to handle Siri request on the Apple Watch: 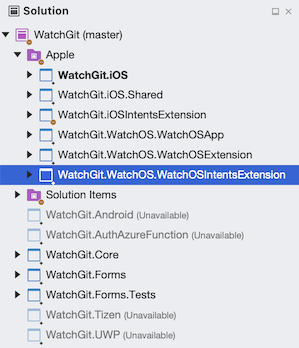 Xamarin tries to share code between the assemblies, and it doesn’t work in this situation.

I needed to specify an mtouch flag in the build settings for both the extension, and the intents extension projects: --nodevcodeshare 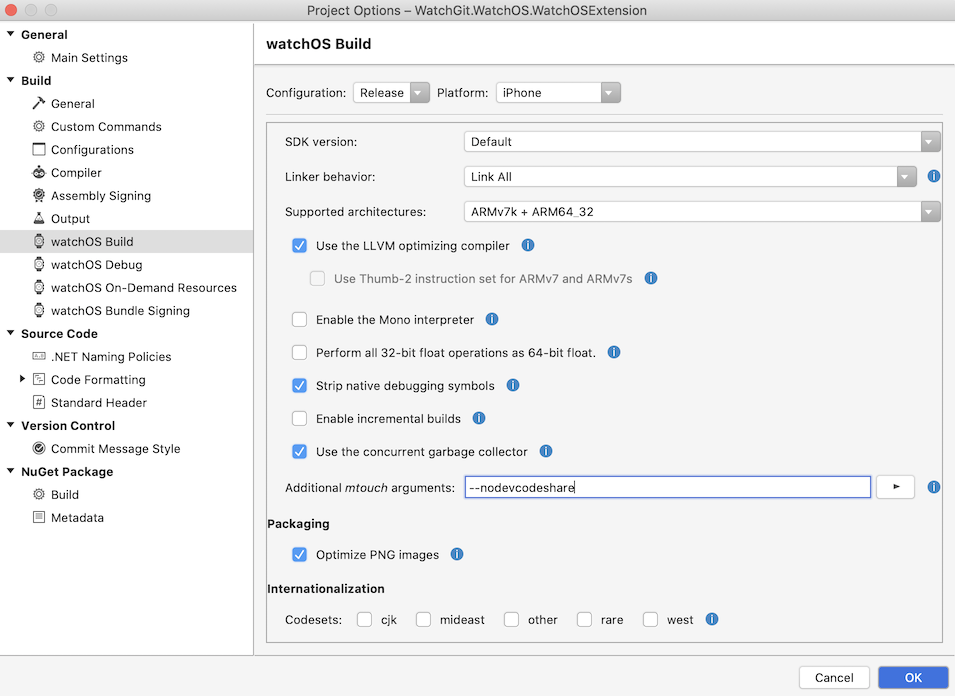 This fixed the issue, but had unintended consequences.

I was pretty confident after fixing the issue with the shared code by enabling the nodevshare flag. Indeed the app uploaded to TestFlight, and I waited for it to be processed. I received this email:

It seems as though by removing the sharing of code between my watch app’s extension, and the intents extension, I’d exceeded the max app size.

All was not lost however, I knew how to handle this one: I could tell the linker to link everything which would remove all code that wasn’t needed. You’ll see I changed the Linker behavior from Link Framework SDKs Only to Link All.

I also told the linker to skip my “Core” project, where I put all non platform-specific code that can be shared between iOS, WatchOS, MacOS, Android, UWP, Wear OS, Tizen and xBox (which is the whole point of using Xamarin in the first place, perhaps second only to being able to use C#): 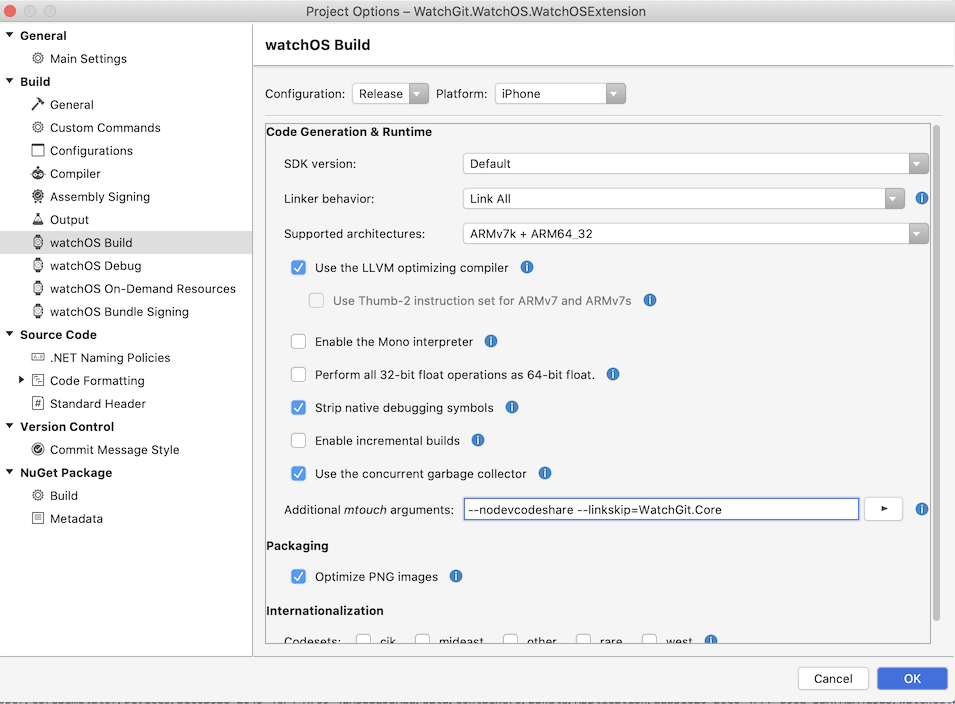 Once again, brimming with confidence, I uploaded my new build to TestFlight in the App Store. I was so confident I didn’t even test locally on a real phone, just in the Simulator. That was a mistake.

Once again it crashed on launch, but I was able to reproduce this crash on a local Apple Watch - I sprinkled Exception handlers in all the places I’d missed, and discovered the cause of a crash.

I use a Shared Project to share code between my iOS app and my WatchOS app: 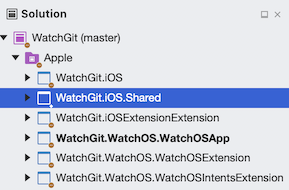 specifically a class I use to to transfer information between the devices as serialized JSON:

This was being linked away because I wasn’t explicitly instantiating it anywhere, instead I let the JSON deserializer do that:

The solution was once again straight-forward and well documented. If you want to tell the linker not to throw code away you can define and use a Preserve attribute:

On the real watch, when testing, I found that I got a crash when hard-pressing the screen to display my app’s menu:

Fortunately I remembered getting this error in my first Apple Watch app, and remembered the magic formula to stop the dynamic linker from being thrown away in my main Interface Controller:

I don’t remember the details, but I guess the menu system must use dynamic registrar, and this code keeps it from being linked away. 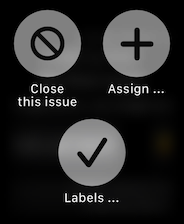 Finally, bliss, I could download my app from TestFlight and test it myself, and perhaps even one day make it available as public TestFlight beta…

After a lot of testing I decided to make my app available as a public TestFlight beta. This involves adding a tester that isn’t one of the registered developers. Apple do some manual checks, which, while not as exhaustive as when you publish the app to the store, invariably they throw up an issue or two.

So I was not surprised when I received my rejection email. I was surprised at the reason.

When I checked out the resolution center, expecting some deeply technical reason as to why it was not accepted, I saw that all they wanted was a video of the app in action:

Now comes the scary part. Will anyone care about my new app? I guess I’ll find out!

All these hassles do sometimes make me question my decision to use Xamarin for Apple Watch apps, especially when it seems as though there may be doubt about support going forward.

I am tempted to use Swift for my next app, just to get the experience. But I do love C# - going back to using closures to handle async task completion rather than using async/await seems like going back to the dark ages.

I realize I’ve not said what my app does. If you’ve made it this far, and you use GitHub and have an Apple Watch, please give my app, called WatchGit, a spin. You can use it to create issues using Siri, view issues, comment on issues, add emoji, close issues, assign issues, and change labels. It’s all about the issues.

I provide Xamarin consulting via my company Atadore. I’ve built and released apps using Xamarin for iOS, WatchOS, MacOS, Windows, Xbox, Android, Tizen, and WearOS. I’m engaged until the end of 2020, but feel free to contact me at damian@mehers.com if you have opportunities, or need a hand.